This is something that I’ve wanted to try for a very long time! I was gifted a single short branch (less than 1/2 inch thick and about 16 inches long) of a mature tree and grabbed at the opportunity. There’s been so much interest that I pulled the several write-ups together onto one page. This is all edited from the various newsletters…. and of course, this kept going….

That is what piqued my interest, the idea of making a cheese by stirring it with a twig! I’m in process of tracking down more sources and maybe some of the science behind it.

I’m also intrigued by finding a reference to the presence of ficain in the skin of unripe figs, https://en.wikipedia.org/wiki/Ficain, so that was another to try as several small figs were present on the trimmed branches that I was gifted.

Things started slowly on Monday, since we had a lot of mundane cleaning up to do after the crazy weekend. …and then things went crazy *again* so Loren went out to get milk for the cheese at 5:30 pm, while Anja worked on the carrots, and then we were able to get started, finally, at 6:40pm.

We tried for the “flow of milky sap” that the books talk about…. ’nuffin’s… so the branch got peeled and chucked into the milk while it was warming to room temp and a bit over to sit overnight.

This is regular pasteurized whole milk from the local grocery. I didn’t want to risk something fancy on an experiment!

This is the link to the article I started from …. http://blog.cheesemaking.com/making-rennet-from-fig-sap/

I thought the fig sap rennet didn’t work. Nothing was visibly separating along the sides of the pot in the morning, or even later in the day, but when I lifted the lid in the middle of the evening, there was a *huge* bubble up of curd! The curd was stirred, rather than cut, then heated to 120F and left at that temp for about 10 minutes while I got the cheese vessels set up and together.

There wasn’t a lot of room, since other projects (including a non-period carrot soup) had been happening there, but I scooped out the curds with the big ladle into the cloth, salting/spicing as I went.

That got set aside because more curd, (although in little pieces) was floating in the whey. A cloth over the strainer was to catch them as the whey went through the cloth. Best laid plans…. The whey built up, rather than going through the muslin and then the screen tipped into the pot, splashing all over. Ok, tried again, screen went into the cookpot and the whey was re-poured and again a flood cascaded onto the floor, and then again when I went to pick up the muslin, it shot out every crevice and fold… Well, I didn’t smell like sour milk, at least, just odd from the rennet.

So after hanging for 18 hours I used these instructions for brining. https://tavolamediterranea.com/2017/08/24/making-cheese-romans-columellas-cheese/ She said, 5 Tbsp for 4 cups of water. My pot was way bigger, so I used 8 cups and a heaping 1/2 cup of salt. Instructions said to bring to a rolling boil and then simmer for an hour. There wasn’t quite enough water, but it worked well enough, since the cheese sagged down into the pot.

Also, I tied my cheese, rather than using a clip.

Folks who tried the cheese really liked it. Shockingly, to me, when I cut the cheese on Saturday it was quite *dry* with a very open curd. It had a good flavor, none of the bitterness that some report. Nicely salted and a good eating cheese, all on its own. A lot of people commented on just that, and all the cheese but a little 1 inch triangle was gone. I saved that out for Loren. 🙂

A *lot of folks heard me talking about it and asked questions, mostly SCAdians, but one spate of the ‘Danes on Sunday was really interested and kept me talking about for over an hour to one group after another and then on to other cheeses and how to get started making cheese!

…and Margaret Alexander caught a pic of me, all unawares, serving it to the food table. 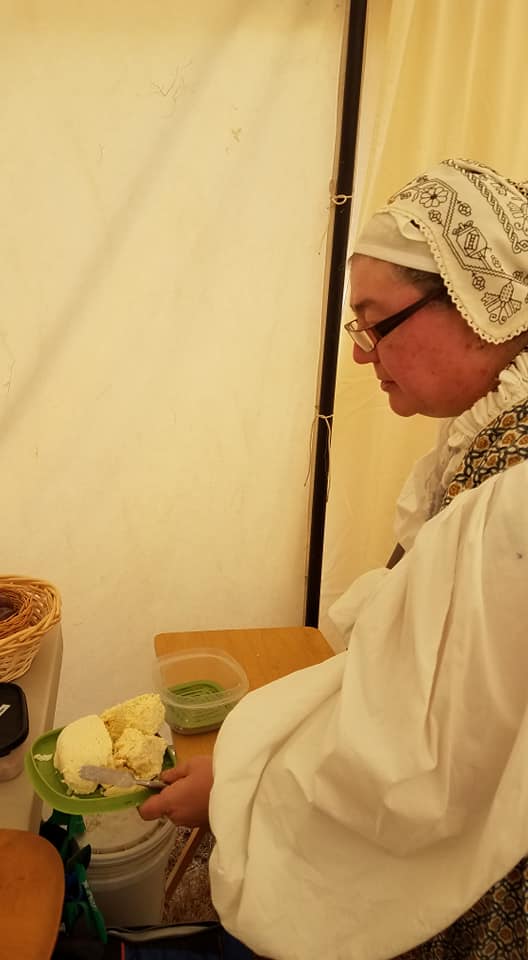 When I realized the cheese worked, and with regular store-bought milk, too, I asked around and was inundated with offers of twigs and sap and even fruit.

10/4 – A fellow came into the shop that day to talk cheese and veg rennets and left with a bunch of info about how-to, and the addy for this page!

On 10/13 Loren went to up to Lakeside to pick up a couple of twigs and also to get some grape leaves to pickle. (Yes, I meant that… stuffed pickled grape leaf instead of green pepper, that I can’t eat…) We ended up with a heap of each. I do mean a heap…. (Pickled grape leaf here: https://wp.me/p8ngGY-1J5 )

This was started Saturday evening (10/13). By Sunday morning there was only a little touch of thickening, so Anja barked a 2nd twig (total of about 22 inches) and added it. It suddenly curdled at about 7pm! It was a soft curd again, but not quite as bubbly or wet as last time. We added garlic and onion powder and dill weed. By 10:30 it was in the molds and being pressed. By 11, one of the bottoms was done and in the mold and the cheese flipped. They sat in the fridge overnight, then were unmolded and brined in the morning. We used 6 cups water, 1/2 cup salt for the brine.

…and people on one of the cheese fora were kinda weirded out by brining in a cloth, so I didn’t. 🙂 …well, the cheeses started to fall apart! So, they got scooped up, put back into the molds and listened to me cuss…. So, they started brining at 11:20 and were put back into the molds at 11:40 and left until 12:40. Once they were pulled out they were put in “drain boxes” (made for veggies) and set in the fridge.

On Tuesday (10/17) some of the cheese got tasted. It *wasn’t* bitter, or if it was, the brining ameliorated the bitterness. It was incredibly salty, but I’m putting that to the explosion in the brine and putting it back into the molds. It was very dry, even though it molded well, almost crumbly, and some did crumble as it was cut.

At 8am, still not much curdling, but you could see something was happening and then at 5pm it finally was turning to curds all through. Phew!

Thursday evening we started another gallon of milk with the unripe figs. The milk was brought to 110 or so, the figs chopped, and added and the pot left under towels overnight.

Friday – It’s possible that the Thursday cheese might have curdled if heated (didn’t think of it in time), but we added rennet and then it really did. The odd part was that there were two layers of curd. One was the usually foamy stuff that the figs produce (that floats), the other was the standard rennet (that sinks) that cut. If you look carefully at the pic of the curd, you can see the cut ones in the center. Anja cooked it by the schiz recipe and molded it for that purpose. …and then the Tuesday brined cheeses exploded out of the molds. There’s got to be a trick for that… but the 3rd cheese of the 2nd batch got *cold* brined. We’ll see if that works. So there are two over-brined cheeses (one of which is grape-leaf-wrapped, plus 4 schiz (which didn’t fit in the boxes either….) We quit at midnight with everything done and fridged and us, really frustrated.

One person loved the fresca and four liked it. Two loved the cold-brined ricotta/regular one and two liked it. 3 enjoyed the leaf-wrapped one and the others got tasted and pronounced, “ok”

Moar taste testing from then until 11/18, at which point we found that the cheeses had suddenly gone moldy.

Fresh unripe fig cheese – With the 1/2 dozen fresh figs that we tried this with last time, it didn’t work right, so Anja asked around Waldport for more and started the cheese on Thursday evening.

She used 10 unripe figs, heated the milk to 110 and left it overnight. Friday evening it was curdling, (or starting to at room temp), so she heated it to 110 (when it really started to curdle) got it up to 120 and left it to release the whey. After an hour it was ladled into a mold and left to drain for another hour while a batch of ricotta was made from the whey and both were fridged and left until Sunday.

The stuff doesn’t curdle the way it does with commercial rennets. It looks more like sour milk until it’s heated and *then* you can see it curdle. No clue, yet, if that’s common, or just an artifact of how late in the year I’m doing this.

Sunday – Instead of cold brining, I’m rolling it in a spiced salt (caraway, mustard and salt). …and it *completely* lost structural integrity, so it’s in the form of spiced curds in a box, at the current time. The ricotta actually was stiffer!

11/18 – Some of the creamier cheese from the last round of fig rennets is getting used up in cheese toast.

11/18 – On Thanksgiving Sasha got to try some of the cheeses. He said he doesn’t taste any bitterness…. I wonder if the bitterness is a “super-taster” thing?

11/18  – Thursday was the cheese. It was started Wednesday evening, then slowly warmed Thursday evening until it curdled at 110F, cooked for an hour, then poured into the mold and spiced and the ricotta started. The ricotta got added to the bottom of the cheese, instead of being stored separately. Friday the cheese was pulled from the mold, but part of it stayed in the mold until cut out, so it ain’t pretty…. It got pulled out of the drain box after that finished and broken up into some smaller containers.