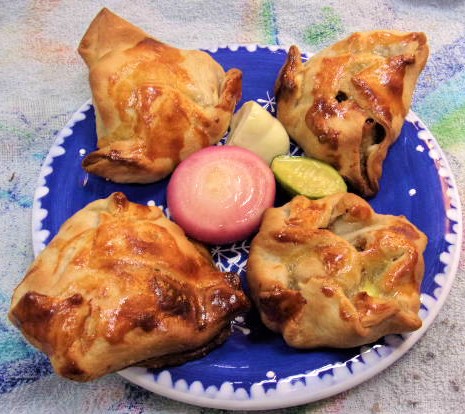 Cooking and cooking and cooking this week. Recipes and ingredients earlier and then finished dishes from Wednesday on. There are lots more class links this week and the Collegium schedule is up. …and other links, too. This has been a week for research!

Misc – Everyone ought to know how to dance a pavane. It’s actually a really simple dance.

The Collegium Schedule is up! – https://collegium.antir.org/collegium-v-schedule/

Interview with a Raven | The Tower of London

Medieval Mayhem – How to make a Hedeby Bag (Viking DIY)

Early Week – The report got done earlier than usual, so the monthly pointer post started being put together and was published on Monday.

Cookery – Early in the week Anja was working on recipes. On Wednesday she and Loren did a trial run on carrot pudding, which turned out to be a very soupy batter, but tender and tasty once baked.

On Thursday they did the pork pasties and had them with some of the pickled onions and cukes from the last two weeks. Those were good, but the pie dough that we used had an odd, bitter, oily flavor that Anja didn’t care for. It’s a generic that we won’t buy again. The pickled onion was delicious, but the cukes were already getting soft. Still very tasty!

Friday was the mortar chickens. These were pretty easy, but the batter was a little disappointing since it tended to slide off. Again, quite tasty, and we had them with more of the pickles, barley and oat girdle cakes and finished up with Apple Muse. …and when I posted it in one of the culinary groups? <sigh> I was supposed to pound the chicken in a mortar, not stick it together! <head smack> Although several people posted that I was pretty brave to show how stupid I can be in public. <urple>

Saturday was some additions to the apple muse and then serving it with fresh raspberries. Later we worked on the precedella. The first batch was really yum, just a hint of anise. The 2nd batch got left too long when we got distracted. <sigh>

On Sunday first up was the hard-boiled eggs for the “spoon dish of egg”, then Loren made bread, then Anja got some chicken cooked for a 2nd run at the mortar chickens. The egg ribbons were more like egg rice…. but good. Last thing of the night, we pulled out one of the cherry melomels and had that. One is going flat in the fridge, but the other we drank warm. Not quite enough cherry for me, but tasty!

Photos are all below under Potluck and Recipes…..

Herb Bunch – Mid-week we got seeds for alexanders, nettles and shallot starts. Small, inner cloves of garlic have been being collected up and planted for a month. The leeks that we got a couple of weeks back had their root ends re-planted. Ditto, spring onions. Watering and tending had to happen, too. …and a batch of garlic bulbs got processed for roasted garlic, for sauce and butter. Fall garlic, gah…. mold, rotten cloves, urgh….It peels easily, but ook… On Sunday shallots went in around the parsley.

Project Day – Most of the day went just into cookery. Anja was monitoring the Virtual Project Day links, but no one else showed. Loren got some bread made. After we got all the photos together, Anja started in on processing and adding links to this report.

Potluck – Our Virtual Potluck has been going on all week, which gives us room to do a lot more experiments. The mortar chicken is a good example. That got worked on from Wednesday through Sunday.

The Apple Muse in two incarnations

Take a twopenny lofe grated; and the same quantity of raw caret grated very small; mix them together; and put to it the yolks of eight eggs, and the whites of 3 beat them well and put them in, then stir in a quarter of a pounde of butter being melted, and a little sack; and grated nutmeg; put in milk enough to make it of a good thickness, about a pinte I believe will be enough; sweeten it pretty sweet to yr tast, mingle all well together; and bake it in a dish, half an hour will do it; when you draw it, poure a little melted butter with Sack in it; one ye top of it. – Bibliography: Wood, Jacqui – Rebecca Price, The Compleat Cook, 1681

Take lamb, rump, or fresh pork loin, and a slice of smoked bacon, for taste. Chop everything very well. With the cloves, saffron, pepper, ginger, dried coriander, lemon or sauce broth, and a spoon of butter, sauté the minced meat and bacon. Cook over low heat. Once ready, let it cool and make the pastries, well filled; brush with egg yolk and bake in a hot oven. In the same way, chicken pasties are made. The pastries will be more delicious, if filled with raw meat.

Take a roasted chicken, dismember it small and take the sheer meat of it. And take a thin batter of eggs and of pepper, anise, pepper and saffron and pound it all together in a mortar. Fry it in a little fat, those are mortar chickens.

A Spoon dish of Egg

For each mush you must have a cup-shaped bowl (becher schal) that has several holes. Put the white into one bowl. Put the yolks into another separately. You must have a lid for each bowl with which you can push it through (the holes). And you should push it so that the little worms become as long as the serving bowl. Draw it away from yourself a little, and the other one towards you, and end with (that) pull. And take a bowl and draw it across even more strongly, back and forth lengthwise. But take the white and after the white, the yolk, as long as you have of that.

The garlic was roasted earlier. It was spun in a food processor with 2 TBSP of butter. 1/2 cup of water went into the fry pan and then the butter/garlic mixed was melted into it and cooked. 1 TBSP of flour was added to thicken and stirred until it thickened.

Laurence O’Coileain of the Middle Ages – from Facebook, used with permission.

Death of a Hiberno-Norse. A early 11th century Irishman who was raised by Norse was slain in battle during the Norman Conquest. His father was an Irishman who was enslaved as a thrall as a young boy. This young thrall protected his masters horse and belongings from Welsh during a raid. He was manumitted and thus released from slavery to be a freeman. He still owed allegiance and had to vote like his ex capture but he was able to own land and make a living and raid accordingly. It was on one of these raids that he was a part of that he took a woman to be his partner. She was a Norman of the Frankish territory given to Rolo. She however was Christian as he was still pagan. They made it work and had many children over the years.

This brings us to THL Laurence O’Coileain. He was the mating of a pagan and Christian. His mother’s patron saint was Laurence of Rome. Thus our man got his name from a Christian saint. He himself went plundering and found himself at a pivotal time in Britannia. He was a Norse man for all accounts living in Yorvik.

He however was a tradesman that made leather products in the town of Yorvik. He took a wife from Normandy as well. Like father like son. He built a nice life for him and his family.

Hand sewn tunic of wool with silk embroidery. Wool trousers with leg wraps and over wraps. Leather boots. Several woven belts from loved ones. Tarsoly pouch from the Magyar people of the Carpathian basin and seaux in a leather belt with fittings from Magyar people.

Amber necklace from the Baltic region.

Food for the journey and game of Hnefatafl.

His shield, sword, chainmaille and helm with his ax he broke in his final battle.

His tools of the leather trade that he made a living doing.

His hobby of sorts that he picked up when he was traveling. Illumination pigments and brushes made of feathers and hair.

Finally his personal banner. All laid upon the furs of hunts and trading.

He was a good man. His dog was buried with him to keep him company. Lastly he was known for his wolves that he wore as a cloak upon his back lay at his feet to keep the chill of the midnight breeze off him.

Amazing pictures – Why did Paul Doll disappear into the mountains 50 years ago — taking his collection with him? – https://www.christies.com/features/Paul-W-Doll-collection-11026-1.aspx

Lost Languages Discovered in One of the World’s Oldest Continuously Run Libraries – https://www.smithsonianmag.com/smart-news/long-lost-languages-found-manuscripts-egyptian-monastery-180964698/?fbclid=IwAR3B5j5VnmutTjUdpX4F2CXn-cAQV2Ha8WhakcWIEDI1WbVwBAW5lthZAU8#.X4DJtVDEvAk.facebook

Chromium steel was first made a thousand years ago, researchers find – https://www.medievalists.net/2020/10/chromium-steel/

When Catherine of Aragon Led England’s Armies to Victory Over Scotland – https://www.smithsonianmag.com/history/when-catherine-aragon-led-englands-armies-victory-over-scotland-180975982/

Why did Harold Godwinson rush to Hastings (Anglo Saxon King)