Anja and Loren have been busy with their shop this week. Project Day was a relief, although Anja was supposed to be teaching and that didn’t quite work, so the class is rescheduled for April 11.

We’re still trying to figure out in-person things. It’s probably all going to wait until

everyone’s had their shots.

Misc – Pillars of the SCA (Vesta’s Song) – Christina Moroney – “This is a song I wrote about Her Awesomeness, the Supreme Shenanigator, Vestia Antonia Aurelia. It is a filk of “Modern Major General” from Pirates of Penzance by Gilbert and Sullivan. Enjoy!”

Sleighs, Sledges and Sleds – Royal University of the Midrealm – RUM – Lady Kathleen Redrider discusses sleighs, sledges, and sleds, along with details on how they were used, and games that could be run while driving and riding them.

Cookery – We cracked open the utopenci on Tuesday and started eating them. They weren’t quite as spicy as usual, although I think the only horseradish in them this time was the powdered stuff in the broth, not nearly as “hot” as the root. A vegetable soup happened on Friday. Marionberry pie happened for Pi Day.

95 Item if you would make pears, take them and cut the pears off above (cut off the tops). Cut out the core and throw it away. And pound the other with fat meat. And take (add) egg yolk and spices and salt. Fill that back into the pears. And set them in the embers and let them roast.

Candied Fruit Peels – a Medieval recipe from 1393 – Nick Saint-Erne – A recipe from 1393 for making candied orange peels using honey, from Le Menagerie de Paris (The Goodman of Paris). Modern recipes mostly use sugar to make candied citrus peels, but sugar in the Middle Ages was imported into Europe, so it was expensive and honey could be procured locally. The candied orange peel can be used to flavor sauces and desserts, or just nibbled on like candy.

Sewing – Finishing touches for some pieces of the sewing kit happened. The mistake in the ripper case got picked out and more of the embroidery finished. A pouch to hold things is now in process, as well.

Medieval Head Coverings. Part 2: the Turban or Kerchief – Lynne Fairchild – A short video with historic examples of medieval turban-style head coverings for women and how to take a simple piece of fabric to create your own medieval head covering.

Sundials, etc. – One larger needle is finished. Another is in process. 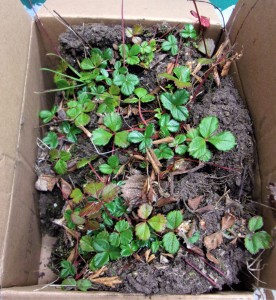 Herb Bunch – Strawberries! A lady in Bayshore was giving away plants. Ours are getting a little tired, so these will perk up the one bucket and we can set up another.

How to Grow Organic Food like Medieval Farmers – https://www.medievalists.net/2021/02/organic-farming-medieval/

Project Day – Right at the last second Disa had to bow out of doing the class today. She got her COVID shot yesterday and was feeling pretty bad. <sigh>

So talking online was the big thing for awhile. The template was being futzed with by Facebook, too. Arlys was also fighting Facebook trying to get a new page up. She did post her little lion, earlier.

Helen was working drafting a pattern.

A look back at the Gross Project of 2014 – The House members challenged ourselves to make at least 144 pieces of largesse! This was 168….

…and well received. We won the prize and the Princess honored us with a bunch of goodies.