Can you imagine if this goes on all summer? I don’t really want to think about it, but dayum…. Lots more classes are coming online every day? There’s a games symposium this week, with 12 classes on various games including Gluckhaus, Chess and Tarot…although one of their classes is labeled Albequerque… I thought it was Alquerque… Well, your scribe’s been taking advantage of the

feast! Some of the better classes are linked below.

…and there are challenges going on! In cooking, in largesse, dance-offs! Take advantage of this!

The meetings that the House is holding are the Virtual Project Day (weekly) and the Virtual Potluck (monthly) We can’t do any more than that with the regulations at the moment.

…and yay for the folks in this one! Not a dance-off.

Search for the Cure pt 2 – https://drachenwald.sca.org/posts/news/2020/04/13/search-for-the-cure-part2/?fbclid=IwAR3MrxkyI0iHP5EVFu6xEpYMezjkib_Fhn6s5jgeqeKZcvD97RA5g0E11qk

Early Week – Your scribe was down with a migraine, so the weekly report went out later than usual and nothing much else was going on. Loren finished the bag holder (on Wednesday) that we were working on last week, so that got filled and put to use.

Capouns in Councys was Saturday, along with some root veg and greens.

Anja’s notes from Saturday – The dripping thing in the shelves was a sweet potato that didn’t make it to the fridge. <sigh> It dripped and molded all over the parsnips and turnips, (ew) so I asked Loren to deal with it. He got a bucket and took it all outside, thankfully. He also needed to wash the leek leaves. That is one muddy vegetable…. I got the carrots, the no-longer-muddy leeks and some onions going in a pot and the chicken in the nuker and then went out and planted the leek and onion ends. … 2nd batch of veg went in, scrubbed, peeled and chopped, after the first was drained. When those were cooked, the chicken went into the broth to “Seethe him that they be tendre.” Bread crumbs and spices were next and then plating, pour the sauce over and eat! Pix below…. Sunday was more meat and fruit pies and then the Pompeii Leeks and Olive.

Sewing – With fewer than two rows to go, the footstool cover was almost done on Monday. The last stitches went in on Thursday. There might be some fill-in needed once it’s going onto the board. We started working on what will be on the inside. Tempus worked out how to do the support boards and went hunting for the other piece of needlework canvas for the sitting stool. Anja found a bunch of needlework patterns that she’s starting to work up for her Mab’s Creations stuff and then pulled out the last cuff and started working on that. No pix, yet.

Herb Bunch – Things are really starting to get big and bloom! Sprouting garlics got planted when discovered in the bin and a couple of potatoes that were trying to grow beards. 🙂 Lots of weeding was done and some discoveries of things that have volunteered… There’s more to do…always.

Project Day – Anja started the day with a class in bucellatum, then got into a fiber day thing that didn’t work very well. Checking in on the Virtual Project Day event and also the regular House Capuchin page was next. Plant tending needed to be done. After that she sat down with paper and pencil and tried to figure out what she needed on the inside of the footstool cover.

We had a couple of people participating in the virtual world.

Potluck – This being a virtual potluck, we got pictures all week as we prepared and ate things. Sunday morning the leek and olive dish got prepped, then made pie crusts and baked small pies, 4 each of meat pies and apple/berry. Plants were next, then photos. After a delay while Loren did some work outside, we sat down to our little feast. 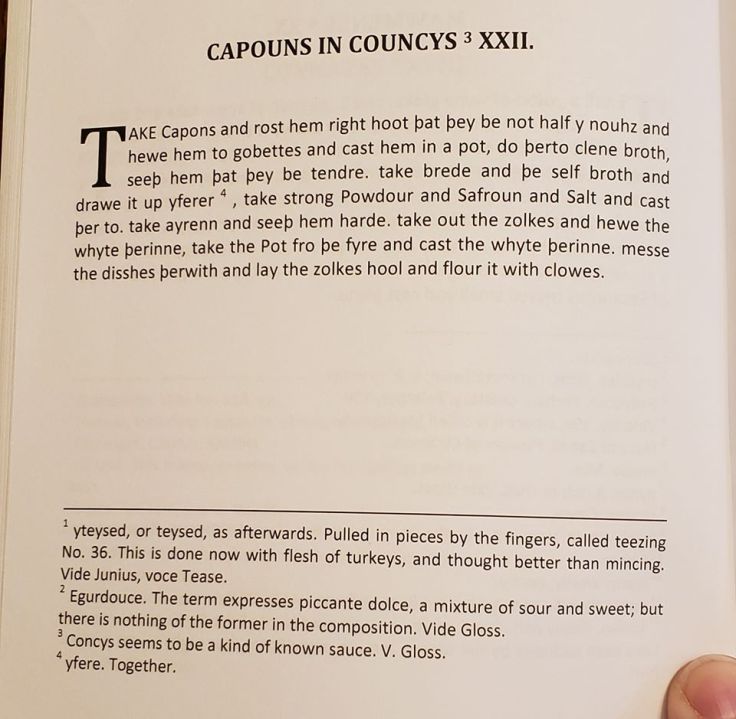 Take capons (chicken) and roast him right that he be not half-enough (half-cooked) and hew him to gobbets and cast him in a pot. Do thereto clean broth. (Add strained broth) Seeth him that he be tender. (Simmer) Take bread and the self-broth and draw it up together (drain the chicken and put bread in the broth). Take Powder Forte and Saffron and salt and cast thereto. (add it…) Take eggs and seeth them hard (hardboil some eggs). Take out the yolks and hew the white therein. (Separate whites and yolks and chop the white.) Take the pot from the fire and cast the white therein. Messe the dishes therewith (plate the chicken, pour the sauce over.) Lay the yolks whole and flour it with cloves. (Set the whole yolks around attractively and sprinkle the whole thing with ground clove.)

Some changes and additions to the recipe. I got the broth from a pot of veg that I boiled up in two lots. Carrot, turnip, parsnip, a couple of rosemary needles, a bay leaf, leeks, leftover salad greens, dandelion, sorrel and cress leaves, thinnings and a carrot top and a couple of small beet leaves along with a single huge nasturtium leaf, and a little salt. The veg were strained a set aside and the broth went back into the pot.

I nuked the chicken until it wasn’t pink, then shredded with a fork, then simmered until done along with mustard, caraway, horseradish, garlic and salt. I didn’t have any non-pepper powder fort!. After that the chicken went into a serving dish and 1/2 the broth went into a canning jar. The other half got a big pinch of saffron and a bunch of breadcrumbs and I let it heat for a couple of minutes after stirring. I got the hardboiled eggs taken apart. Yolks went on top of the chicken. I chopped the whites and that went into the sauce, which was done about 30 seconds after that with some frantic stirring. Sauce was poured over the serving dish and then I “floured” with the clove….far too much clove since I didn’t realize there was no shaker top in the jar. Loren liked it, though. I loved the parts where the clove was light.

The veg went beside the chicken on the plate with a pat of butter. It’s nicely spicy (where it wasn’t tongue-numbing) and the veg, not being heavily spiced, were a good contrast.

Make a syrup of red wine or balsamic vinegar and honey 1:1. Heat until dissolved, then bottle and store until needed. (Keeps at least a year at room temp!)

Take your pitcher and fill, mostly full, with water. Add 1.4 cup syrup to the quart and stir. Store in the fridge, but it will keep for a day or so at room temp. Cover it or you will have a fruitfly trap….