It’s been another quiet week. House members have been very busy: Amy with school, Anja and Loren with the shop, Gogor and Sash and Kaylee with work, Stella working on her various projects, but we’re getting things done and always setting up new projects.

Next week House members may get to Adiantum’s Birthday Bash, but since Loren and Anja aren’t going to be able to go, all meetings are at the normal times this week.

Other than unpacking and Anja trying to find her strayed pincushion there wasn’t that much going on. Anja did manage to spend a little time with the period foods list again, though, getting some things added. (Found the pincushion on Tuesday….) Stella stopped by with some finds for beading or painting and Amy stopped to let us know that while school has eaten her, she hopes it will eventually spit her back out!

Missive from the King and Queen:

Due to the death of our beloved Kingdom Bardic Champion, Conchobar, We present the following:

The remainder of Conchobar’s term in the office of Bardic Champion will be divided between three noble and worthy bards: As second place at KASB, We give Lady Sholeh of Susa, of the Shire of Couer du Val, the honor of serving as Our Bardic Champion through July Coronation and give the Champion’s Challenge during our successors’ Coronation.

prior Bardic Champion, will take up the cloak and serve Our successors through An Tir Collegium.

Following Collegium, Master Martin le Harpeur, another well-serving prior Bardic Champion, will take up the cloak and serve until a new Bardic Champion is selected in the usual manner at Kingdom Arts & Sciences and Bardic next March.

In love and service,

Sewing Time – Got well scattered through the week. Loren was working on needles and Anja more pincushions. Most likely Stella was crocheting, but we didn’t see that until Sunday!

Herb Bunch – Most of what we did today was make seed-starting pots and talk about some of the seed that we have, mostly about the gourd, but also a little about chives and leeks and how are we going to grow the shallots without something eating the bulbs. Some lungwort and bergamot got harvested, dried off and hung for drying. We had a “friend” visit on the bergamot, probably the same guy that was chewing the leeks, yesterday!

Started with clearing space to work. *How* does that table fill up so fast? Anja got going on more of the “period foods” list, finding some of the obscure things that have come up in the last few weeks of research. She and Loren also talked over how to finish the Latgallian Headdress, since they’re looking at buying materials soon.

Loren started in on a curved bone needle (suggested by our son, Amor) and when Amy got there, she and Anja worked on cup covers and embroidery and we all talked about SCA politics, period foods, the possibility of doing a Russian Feast and lots of other things.

We also talked about doing pool noodle stick horses as a way of making a stick horse suitable for someone small, since if they bop someone with it, or fall on it, no one will get hurt! 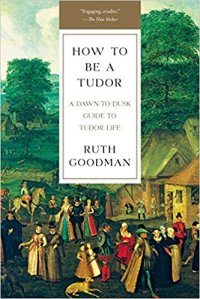 Anja got this book after hearing from Seamus that he was reading it. It’s got a marvelously chatty style and is a good secondary source, with some primary from Ruth’s own experience. We’re familiar with “Secrets of the Castle”, the BBC series about Guedelon Castle, which she also did, but her first love is the Tudor era and it *shows*. This is an easy, fast read even though it’s information-dense. The biggest problem is that she cites sources, and then doesn’t tell you where the info is in the source, or where to find the source! …and some of these are really obscure texts.