Oh, we’re getting tired! It’s tourist season on the Coast and Loren and Anja are wearing a little thin. Projects are moving more and more slowly because of it. Despite that we had a good “Virtual Potluck” with some fun and tasty foods being served, including Peggy’s “Farts of Portingale”. 🙂

This week should give us a little more project time, which is good because the plants are getting neglected. 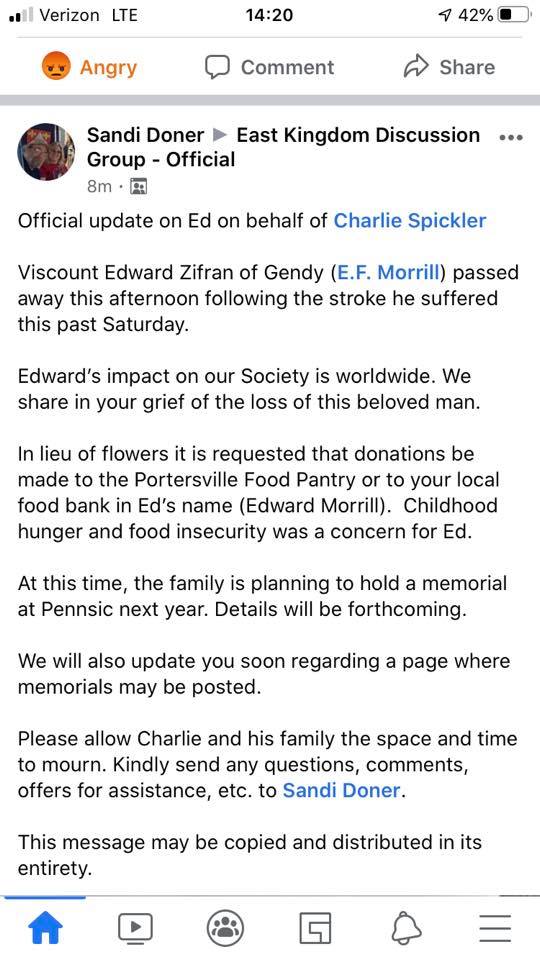 from the An Tir Rebellion.
Oh, Eddie Boy, the BoD, the Bod is calling,
Long-distance rates, across the great state lines,
Your ass is grass and we’re all branded traitors,
Well, the idea seemed a good one at the time.
And if An Tir should e’er become a kingdom,
When you are dead, for martyred you must be,
We will seek out your lonely rebel graveside,
And stand and sing a kaddish there for thee.

Road to Athenaeum page for Beekeeping through the Age (supplementary material) – https://athenaeum.baronyofmadrone.net/exhibit/beekeeping-through-the-ages/

Early Week – Anja was trying to get the potluck foods 2018-20 page finished. It got published Thursday evening, and the older page 2014-17 got updated later that night. There’s more to be done on these.

Cookery – During the early part of the week we were really enjoying the lemon curd. Loren made bread rolls on Monday and we bought a loaf from the day-old shelf on Tuesday to have it on. We also picked up a couple of the pork tenderloins that we’re been enjoying over the last year (they were a BOGO) one went in the freezer and one went into a crockpot with the last of the Sauce Bob and a little wine that night. Pickled eggs and Cacik happened during the week. On Thursday the carrots got done. We had found some rainbow carrots and mixed those 1/2 and 1/2 with orange. The rest of the orange carrots went into a pasta salad. It wasn’t until Sunday that we actually managed to get the tarts done, and since the almond meal was AWOL they became egg custard tarts.

Interesting note about the “diet of medieval peasants.” The time/place in question is West Cotton in Suffolk, England, from 950 CE through the mid 15th century. The investigators assessed “123 potsherds from 73 reconstructed vessels…They found that 60% of the containers had held meat from cattle and sheep, while a quarter of the pots had probably been used solely for dairy products such as butter and cheese. In many of the pots, biomarkers for leafy vegetables – particularly cabbage and leek – were also identified alongside the meat residues, suggesting that these vessels were used to cook stews or pottages.”

In addition, “This analysis found that most of [the remains] came from domesticated animals – mainly sheep, cattle, and pigs – while relatively few came from fish or game. Interestingly, despite pig remains being well represented among the faunal assemblage, only 10% of the vessels appear to have been used to cook pork. This might suggest that pigs were more commonly roasted whole on spits rather than stewed in pots.”

The conclusion the investigators came to was that “the diet of medieval peasants was quite different from that of their higher-status counterparts, subsisting more on dairy products and on meat and vegetable stews than on fish or game.” – From the magazine Current Archaeology, Issue 353, August 2019.

Sewing – Almost nothing this week, other than a few stitches at a time on the kiss-lock pouch.

Herb Bunch – There are times when I really wonder about people. You know the little fig tree that we’ve been getting pictures of since we planted it in March? Yes, this tree. >>>>>>

Someone stole it, pot and all, in the early week. Anja was heartbroken. …but the fellow who sold it to her in the first place brought her *five* new starts! …and then on Thursday another person brought several *more* starts!

Some are sitting, waiting to be a little tougher before planting. One set went into a pot, but they’re dealing with transplant shock.

Project Day – Was a little scrambled. We pecked at projects all day, but had steady customers until 4, so we were taking turns. Same projects as there’ve been.

From the Virtual Project Day

“Peggy – Okay….it’s been an hour and nobody has asked….It is angel hair pasta with herbs and….Farts of Portingale.

A – Oh, cool! You made them! How did they taste? I was still cooking up until a few minutes ago.

Peggy – Actually pretty good. I cut back on the cloves a bit so it wouldn’t be as overpowering. And I will need to chop the dates a little finer. My son said he would eat them again, so there you go.”

Peggy – “Some comments on making Farts of Portingale…..When I make it again I will see if the meat department can grind it for me, that was the only way I could ‘mince’ it good enough to make meatballs out of it and my grinder doesn’t work that well any more. I cut back on the powdered cloves so they would not be ‘overpowering’ but it could use a bit more than I put in, also more salt and pepper (to taste). I will need to chop the dates finer. I made sure my beef stock was at least 200 degrees and obviously bubbling/simmering before I dropped the meatballs in to cook. When you first drop them in, they will sit on the bottom of the pot, but by the time 7 minutes is up, they will be sort of floating.”

Loren and I had our potluck kindof inside out. We started with the grapes, then the tarts.

Eventually we had soup (I did, anyway) and then the main dishes (you can see our plates below. Finally we got around to the nibbles and such!

Soup/Pottage – A “scraped icebox” soup, started from a pork broth with ham, cabbage, celery, carrots and other vegetables.

Steps to Make It

Microwave Lemon Curd – This is “sloppy” compared to the long-cooked lemon curd you usually see. Like “nuker jam” it doesn’t set quite as hard as usual. Btw, this also works as a lemon meringue

Beneath the Surface: An Exquisite Tudor Face Emerges

The portrait in an expandable form. https://philipmould.com/artworks/categories/19/5199-master-of-the-countess-of-warwick-portrait-of-mary-tichborne-b.1541-1565/