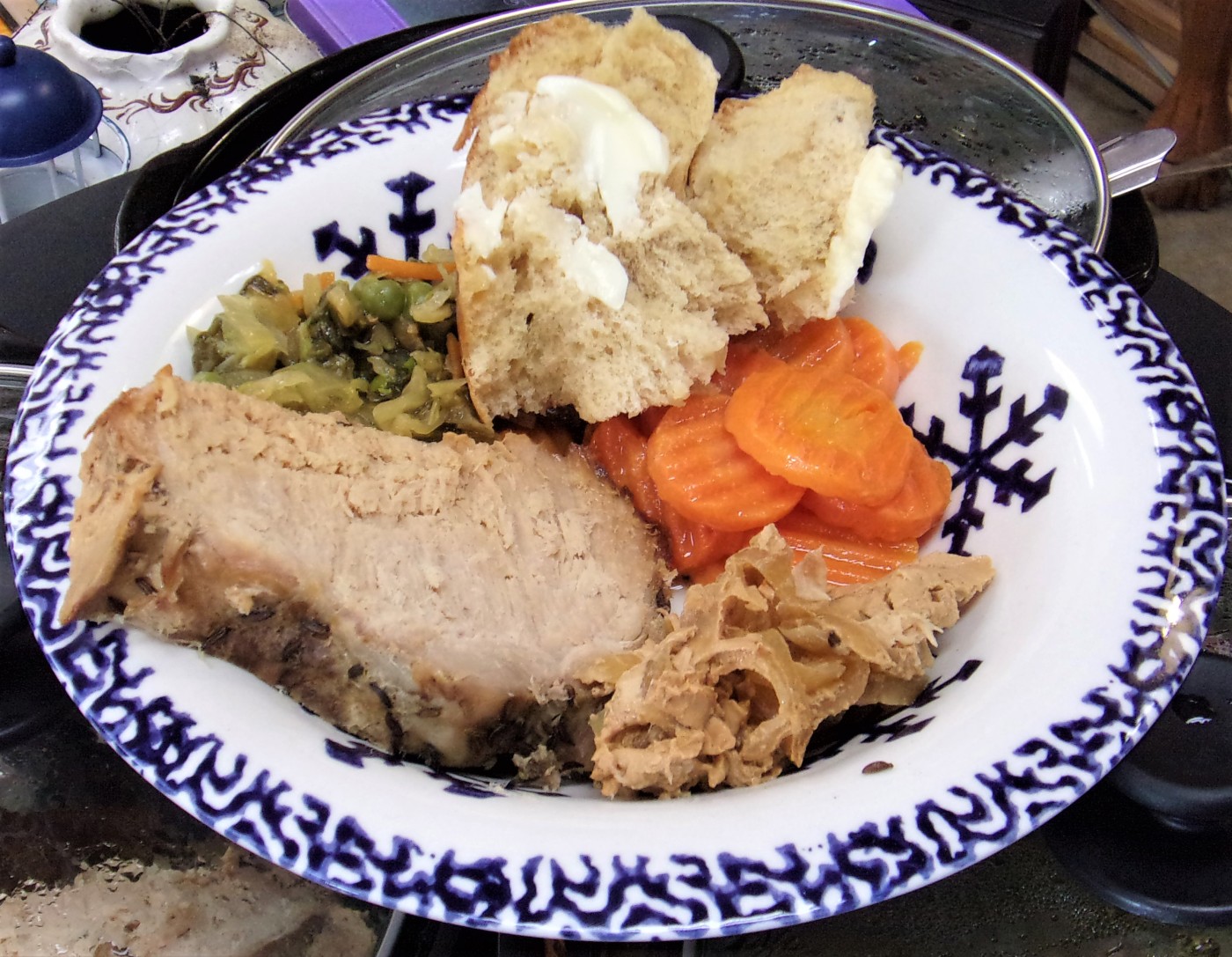 For some reason, your scribe’s been forgetting about some of the link sources that are usually getting quoted here, but now that there aren’t as many class links, I certainly had room for some.

House members) are run off their feet. The heat in the Valley this week made it even more impressive, but we did have our potluck and made some progress on projects… some… not a lot….

This next week we’ll be eating up leftovers (those tarts are *good*, and so are the nibbly bits!) trying the peach tarts and the egg and cheese, tending plants (oh, way to much of that to do!) and trying to make more progress on projects (there’s 5 more inches of braid, today….)

All meetings are on hold for the moment, although Project Day and the Monthly Potluck are being held in the Virtual Realm. We’re also doing mini-

potlucks, just Anja & Loren and one other “pod” at a time. Let us know if you’re interested!

The Museum of West Bohemia in Pilsen has announced that a treasure trove of hundreds of gold and silver coins from the 14th century were found in a forest near the Kladruby monastery in the Tachov region.

The museum will present the find to journalists on Wednesday, a spokesperson said. An unnamed man found the coins in March when walking through the forest in Stříbrsko. A gold coin and several silver ones were exposed after being dug up by wild pigs, the museum spokesperson said.

Among the coins are gold ducats bearing the image of Charles IV, Albrecht of Austria, Rupert of the Palatinate, and from the Hanseatic city of Lübeck, and silver groschen of Wenceslas II, John of Luxembourg and Charles IV. The trove was likely buried in the late 1370s.” 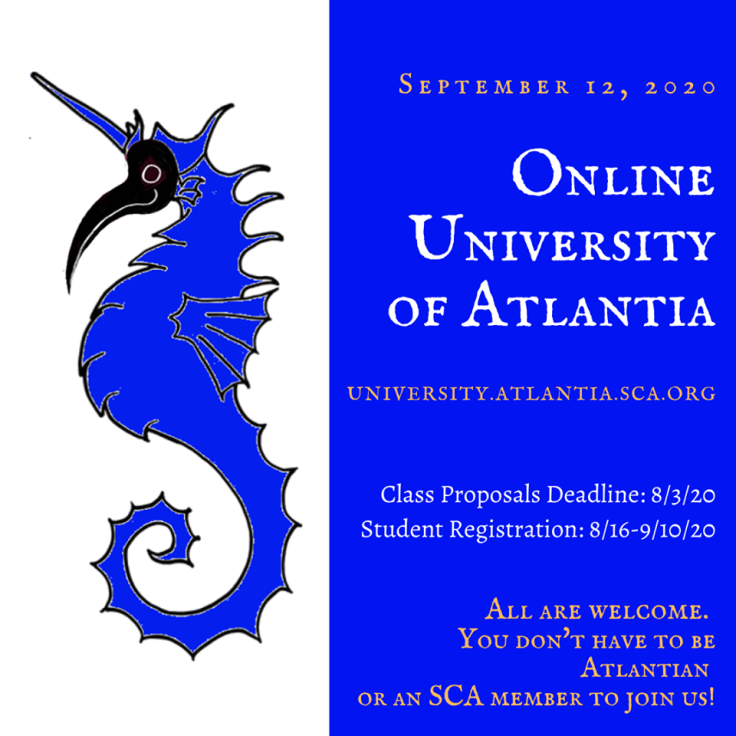 Classes – People must be getting tired, there aren’t nearly as many new classes as there’ve been!

See Something, Do Something, for Bystander Intervention training by Baroness Genevieve Choue

Not sure that this one is coming through. It’s the Sisters Interview with Hlutwige. Let me know if the link fails, please?

Early Week – Not a lot was going on. Some foods got purchased for potluck dishes, a little sewing happened, finding materials… that sort of thing.

Cookery – Volker Bach posted another of his interesting recipes from period cookbooks (A mock pear, next week) and Anja decided she had to try it. Mostly the week was too crazy to do much and then the weekend turned hot. Loren finally pulled out the pork roast Saturday afternoon for us to crock-pot overnight.

We went to strain the limoncello and found out, after it was already straining, that we had one more step and another month before we could! Oops…. so it went right back in the jar. Kummel was next on the list. The kummel got started. Lemon curd was next, but didn’t happen. The pork roast cooked overnight and then there was a frenzy on Sunday. More on that below.

A Database of 5,000 Historical Cookbooks Is Now Online, and You Can Help Improve It – https://www.atlasobscura.com/articles/how-to-find-historic-cookbooks.amp?fbclid=IwAR0Igw6hOLH7SkSrWIcCmHCj6x3q0zCSIEto_iYo1IT6nlYVKVIrMkE6JNM

Sewing – More braiding happened and bits and pieces of doll stuff, plus Anja was putting together kits from some of her blackwork business. A small toy, that will get finished next week because we still need a safe “jingle” to put inside it, also got stitched and the other pattern for a sample pouch got started. Pix below

Herb Bunch – Watering and tending during the week, plus making some starts for a friend who wants some. We have a bunch of things that need dividing, too.

Project Day – We started with getting the roast out of the crock pot and then Anja worked on the butr’d wortes, but had to trade places with Loren so he could do some cleanup. In between cooking things were some work on another bone needle and some embroidery.

Peggy posted that she’s working on dragons and, “been working on scrolls for my Barony and Kingdom. Printed out the picture of those taxidermy fencing frogs….they will become a rapier scroll😁” She’s referring to the frogs in the misc pix below! This pic is some of her dragons. …and then Anja and Loren’s projects, other than food.

We ate at 5, starting with the nibbles, and then had the main course around 6:30. We didn’t start the tarts until it cooled off a bit, so we ended up eating those at around midnight. We were going to do another batch of a cheese and egg tart, but decided to put those off until Monday.

Note – “Wortes” means herbs and “what ya got”. Go pick over your garden and rummage in the fridge. This time I had frozen spinach, cabbage & carrots from a coleslaw mix, a few sprigs each of thyme, oregano, parsley and chives, green onions (chopped from tip to root), sorrel, lettuces that were going to seed, etc.

.ij. Lange Wortes de pesoun.—Take grene pesyn, an washe hem clene an caste hem on a potte, an boyle hem tyl þey breste, an þanne take hem vppe of þe potte, an put hem with brothe yn a-noþer potte, and lete hem kele; þan draw hem þorw a straynowre in-to a fayre potte, an þan take oynonys, and screde hem in to or þre, an take hole wortys and boyle hem in fayre water: and take hem vppe, an ley hem on a fayre bord, an cytte on .iij. or iiij., an ley hem to þe oynonys in þe potte, to þe drawyd pesyn; an let hem boyle tyl þey ben tendyr; an þanne tak fayre oyle and frye hem, or ellys sum fresche broþe of sum maner fresche fysshe, an caste þer-to, an Safron, an salt a quantyte, and serue it forth.

Almond Tarts – Anja’s version – Not as happy with these as I had hoped. They’re a light, delicate flavor, but I was looking for something with more of an attitude. We’ll get some more ingredients and try ’em again. It made 15 tarts.

Baltimore Consort – Tunes from the Attic

The Treacherous World Of The Real Tudor Home | Absolute History