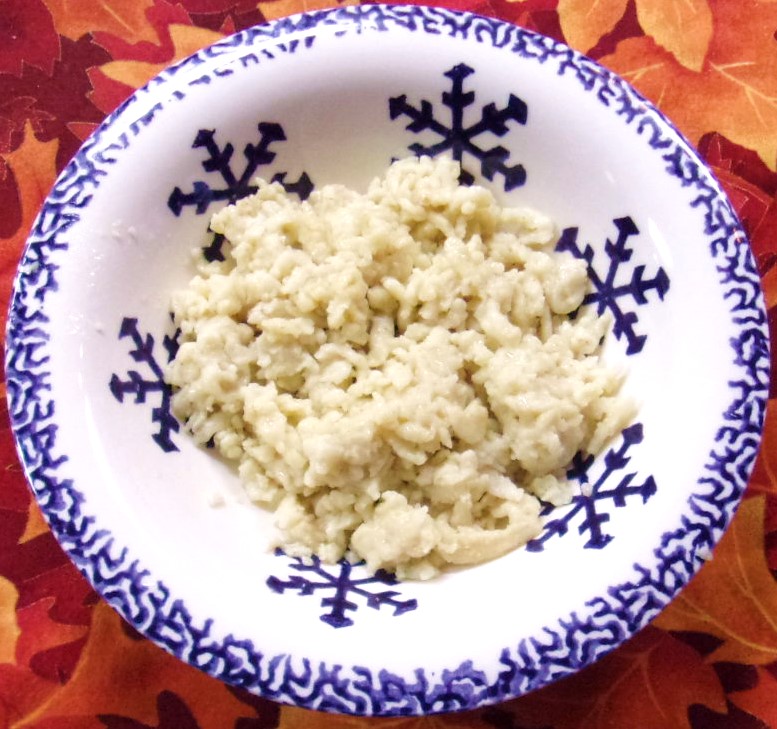 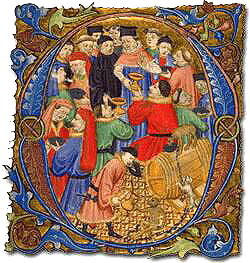 Oh, dear, this is *awfully* late! Write it down to your scribe being ill both Sunday and Monday and going splat…. We got some bits done during the week . We’re starting a new topic in Herbs, which is making candles. This week was emergency candles. The potluck went, but not as well as usual. Still having timing issues on the roasts, and our recent batch of sauerkraut didn’t work right.

All meetings are on time this week and we’ll be starting dip candles in Herbs. Care packages need to go out to the folks who missed the potluck, too.

Early Week – No pix from the early part of the week, since it was all clean-up from the weekend. We set up to do cookies at Sasha’s on Tuesday and then ran out of time to do them, so that’ll happen another day.

Cookery – We kept trying all week to get the time to do a cheese, but it kept having to get put off, mostly in favor of clean-up. Saturday morning a roast was set to thaw and that night we first got a root vegetable stew going and then set up garlic butter and celery and carrot sticks. Everything else was on Sunday.

Sewing – Not much this week. The weather change is screwing with arthritis and we’re still resting up from last weekend. Saturday afternoon sewing went away due to customers, so Anja worked on some small projects in the evening.

Sundials, etc. – Not much this week. The weather change is screwing with arthritis and we’re still resting up from last weekend. A wand got sanded, partway. (That’s rowan wood.) A couple of bowls got pulled and and more pieces found that needed wood butter.

Loren spends most of his free time sanding pieces for rune sets.

Herb Bunch – Some watering happened and a little harvest, mostly thyme, during the week. Anja found some other plants, hiding in back, that also need some tending.

In the Saturday workshop we talked about the Simpling class. After a bit we moved in back and started in on candles. This week’s topic was emergency candle kits and while we were making them we talked about wicks, about recycling wax, about dipping candles and also infused waxes.

Project Day – Started with getting the garlic butter into serving containers. One went into the freezer. The stew got stirred and the forgotten leek tops got stirred in.

At 1pm we started the pork roast and then Anja got some recipes laminated. That’s been waiting until we had a little more room.

Loren got a bread loaf started by 3pm while Anja was processing some pictures. The spaetzle batter, that needs to rest for 30 minutes, got done.

There seemed to be a break in the rain, so Anja took the veg ends from the leeks and parsnips out and planted them in one of the buckets. There were a couple of tomatoes and a strawberry to harvest, too.

The spaetzle was rested, so next up was that process. Amy came in while that was cooking. It took 1/2 an hour for that batch and then another 20 minutes to fry some of it.

Potluck – Amy and Loryea, Loren and Anja were the ones at the potluck. The House Silvermist people had car trouble and had to turn back. 😦

Nibbles while waiting. The bread ran a bit late and the roast even later, but that’s why we have the nibbles to start with. People overate on those, though. The cheeses were delicious and the membrillo mostly went away….

When the bread was ready we brought that out and the tripot that had the stew & spaetzel, but we were still waiting on the roast. Loryea brought a dish of celery root cooked with honey/mustard.

The stew had a bit much of the caraway, but the cooking later moderated that. The spaetzle was great but we *have* to cut down the size of the recipe. We have at least 14 more servings!

The bread was good, as usual, but the garlic butter had gotten too much of the raw garlic, so that’s going to have to be used on garlic bread. The tvarog was pronounced “interesting” by Loryea, who hasn’t had it before.

The Sauerkraut “went”. <sigh> This is the one that bubbled out a lot of the liquid, so we added more.

It apparently did more of that in the fridge when we weren’t looking, being only 2/3 full and it *had* been full when it went in. (Uh-oh, right there) When it was opened, the “cap leaf” was moldy… and yeah, that had penetrated the dry stuff below it and the liquid was cloudy. We put samples onto dishes to sniff… no, it was not edible. Loryea is going to pick up a couple of cabbages so we can try again.

Afterward we are usually stuffed, so the afters were light. Loryea hadn’t heard the comfits research before, either. She and Amy both loved the strawberries and enjoyed the ginger/apple compote. Amy had brought a pie, but no one had room!

The roast was finally up to temp about 15 minutes after Amy headed home….

The predecessor to this song dates to 1595, but this is a “traditional” ballad/shanty – https://en.wikipedia.org/wiki/Coast_of_High_Barbaree

Look ahead, look astern, look the weather and the lee,
Blow high, blow low, and so sailed we
I see a wreck to windward and a lofty ship to lee
A-sailin’ down along the coast of High Barbary

“Are you a privateer, or a man-of-war cried we?”
Blow high, blow low, and so sailed we
“I am a lusty pirate ship come lookin’ for my fee!”
A-sailin’ down along the coast of High Barbary

For broadside, for broadside, we fought along the main,
Blow high, blow low, and so sailed we
Until at last the frigate shot the pirate’s mast away
A-sailin’ down along the coast of High Barbary

With cutlass and gun, O, we fought for hours three;
Blow high, blow low, and so sailed we
The ship is was their coffin and their grave it was the sea
A-sailin’ down along the coast of High Barbary

“For quarter, for quarter”, the saucy pirates cried
Blow high, blow low, and so sailed we
But the quarter that we showed them was to sink them in the tide
A-sailin’ down along the coast of High Barbary

But O! ‘Twas a cruel sight, and grieved us, full sore,
Blow high, blow low, and so sailed we
To see them all a drownin’ as they tried to swim to shore
A-sailin’ down along the coast of High Barbary