Quiet week, this, with projects being worked on and pushed farther towards completion. We’ve been talking about upcoming events and working on some prizes and personal projects.

Early Week – Anja got last week’s report out on Monday and Loren helped get the unpacking done from the event.

The Sunday discussion on mousetraps led to some more research because we want to put together a display using Anja’s mousetrap and get it set up for use. That sent Anja off in search of mouse and cat pix for clipart.

There’s a demo in May in CdV that they’re asking help for, so it’s something that we’re going to discuss and see what we can come up with. 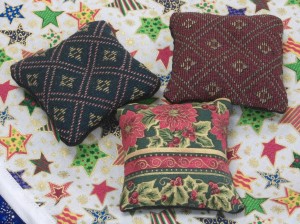 Sewing Time – Anja and Loren spent some time talking about bone needles and dice. Anja was working on pincushions, as well, but ran out of filling, so switched to simple stitching.

One of the cushions on the right got filled on Saturday after the pincushion filling got mixed, but Anja’s not sure which one it was. Maybe the green/gold one? 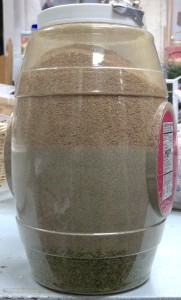 Herb Bunch – Started with prepping chickweed for “tonics” then went on to pincushion filling and ball filling.

Anja’s been collecting witch moss for balls again, and it needs to be dried. We hung it in a basket up in the herb drying hooks.

For the pincushion filling sand & sawdust needed to be sifted and then the whole thing mixed. Anja’s been going through a lot of filling! Tempus did the mixing. After that they talked about various legumes, growing and storing.

Anja got to realizing that the dating of when various legumes started being grown in Europe is important, so that went on early on Sunday.

Project Day – Anja started with finding some information on which legumes grew in Europe in the Middles Ages. It turned out fava, chickpea, regular pea and lentils are the only ones until late period, but the American beans got popular very, very quickly, unlike some of the other New World foods, so even kidney, white and black beans were grown and eaten in later period.

When Stella got there we sat down with sewing, crochet and bone needles and had a great far-ranging discussion of the various projects we’re working on and events that we’re going to.

We have one needle and needlecase, but need a lacing fid, an awl and a couple of bone needles for the Egil’s prizes that we committed to. Stella’s going to help with sanding on Thursday.

She also got some head measurements since she’s doing a lot of crocheted hats.

Anja stitched a couple of pincushions and filled them, then cut a bunch more and started stitching. 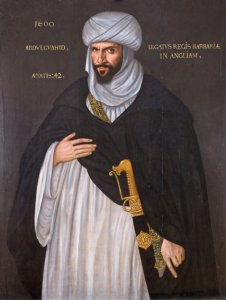 Book Review, THE SULTAN AND THE QUEEN, The Untold Story of Elizabeth and Islam By Jerry Brotton, Illustrated. 338 pp. Viking. – https://www.nytimes.com/2016/12/02/books/review/sultan-and-queen-jerry-brotton.html?_r=1

The Mousetraps & mousecatchers – A couple of decades ago a friend of Anja’s went to England and brought her back (“Whaddaya want me to bring you?” “Surprise me.”) and Renaissance-style mousetrap! We were talking about it on Sunday and it looks like mousetraps are a research subject for awhile.

A booke of fishing with hooke & line, and of all other instruments thereunto belonging. Another of sundrie engines and trappes to take polcats, buzards, rattes, mice and all other kindes of vermine & beasts whatsoeuer, most profitable for all warriners, and such as delight in this kinde of sport and pastime. Made by L.M. – http://quod.lib.umich.edu/cgi/t/text/text-idx?c=eebo;idno=A07166.0001.001