For a holiday weekend, it was pretty quiet. I kept thinking how sad I was that Taran’s elevation wasn’t happening. No Shrewsbury. No coronet except for people who are required…. no invites to feasts and such. <sigh>

So we’re doing things on our own. We had a good project day and a good long video chat. Various projects got worked on during the week, although we didn’t have Herbs Workshop again. <sigh>

Project Day is now open for in-person meet-ups as well as in the Virtual Realm! Potluck this month will be Virtual and Real-World! Herbs and Sewing are ongoing, but not well-attended.

When will the rest of these open up in person? We’ll probably keep right on with the virtual ones side-by-side with the actual.

Misc – This guy is working from outside of our period, but he’s talking about how and why interest and passion develop in us. – What We Hand Down To Our Children – Townsends

Dance Vids – History & Dance Steps of Il Torneo Amoroso – Lynne Fairchild – Il Torneo Amoroso was a late 16th century / early 17th century dance published in Cesare Negri’s dance treatise called Le Gratie d’Amore. Il Torneo Amoroso translates to English as the Love Tournament. This particular dance style was known as combat dance, which was popular during the Elizabethan age. This dance is danced by a couple (two people: one in the lord’s position and one in the lady’s position). It has courting, an argument, and the make-up after the argument.
Also, learn some history about this dance master, as well as different interpretations (and Italian to English translation) of Il Torneo Amoroso (the 7th dance in Negri’s treatise). Plus, instructions of how to do the various dance steps in this dance.

Hurlbats: Late Medieval Throwing Axes – Lynne Fairchild –
The hurlbat, also known as a Wurfbeil, was a throwing axe used in the late Medieval period. The throwing cross was also known as a Wurfkreuz. The hurlbat was developed in the Germanies, in the late 14th century as a disposable cavalry weapon. However, over the next two centuries, the hurlbat slowly lost favor to the simpler “Wurfkreuz”, or throwing cross. The hurlbat was a throwing axe made entirely of metal, fitted with blades or spikes such that it should cut or pierce a target in any orientation when thrown. Historic examples of hurlbats that still exist range from the 13th to the 17th century. Hurlbats and Wurfkreuzen are wonderful tools for teaching thrown weapons to beginners in the SCA.
⏰ Timestamps ⏰
0:00 Demonstration
0:06 Introduction
0:26 Francesca (Francisca) axe / Viking axe
2:11 Goosewing axe
3:34 Early Hurlbats (Wurfbeil)
4:16 Later Hurlbats
5:10 Larger Hurlbats
5:38 Smaller Hurlbats
6:01 Throwing Crosses (Wurfkreuz)
7:40 Thrown weapons for beginners
8:24 Where to purchase hurlbats
9:52 More information

The Medieval University – Medievalists – It’s back to school time. This week, Danièle tells us about life in the medieval university. What did students learn, what was expected of them, and how they really behaved.

Hallstatt 123 – Elewys of Finchingefeld – How to weave a gorgeous tablet weaving pattern from 500 BC Austria.  Several pieces of tablet weaving were found in a salt mine in Austria and have been recreated by expert tablet weavers.  I will show you how easy it is to re-create this pattern.

Nile Floods and Mamluk Farmers – Medievalists – Have you ever wondered what life was like for Mamluk farmers? In this episode, Lucie Laumonier talks with Omar Abdel-Ghaffar, a PhD candidate at Harvard University about Nile floods, landscapes and village communities in late medieval Egypt.

Early Week – Not much going on except for watering and tending plants. Tuesday evening Anja started some embroidery and did a lot of mundane sewing over the next two days.

Cookery – Since we were having a mini-potluck on Sunday, Anja started planning. She was figuring on a nibbles tray, then a pork roast with casik and a mixed veg bowl. Potted cheese was on the agenda, too, so the supplies were bought on Friday (we had the shallots) …and things went sideways on Saturday and then the expected company couldn’t come, after all… The pork roast got cooked, anyway.

For more info about this recipe check out our blog: https://historicalitaliancooking.home.blog/english/recipes/ancient-roman-peas/

A Very Versatile Spice // Saffron!!! – The Creative Contessa – A compact video on saffron’s history and uses and where to buy quality saffron cheaply! Learn how to use this amazing spice in modern cooking and how it has been used from ancient times through the middle ages and the modern day. Fabric dyestuff, manuscript illumination, medicine, perfume, food dye, flavor giver – saffron is an amazing spice with a fascinating history. Also, an unboxing of bulk saffron ordered from Costco, with an exploration of the active ingredients of quality saffron and the properties you should look for when purchasing.
Edit: It has been brought to our attention that we said stamen when it should have been stigma! Thank you for helping us keep facts straight!

Sewing – The mending pile is decimated. Some embroidery got started Tuesday evening and then during workshop time (nobody but Anja). More done in chat on Sunday. Pictures didn’t turn out. 😦

Herb Bunch – Mostly watering this week, but we have achieved beans! Not that the pictures are any good. It’s difficult to get pix to focus…

We also are starting to collect seeds, not just angelica and calendula but garlic and fairy fishing poles 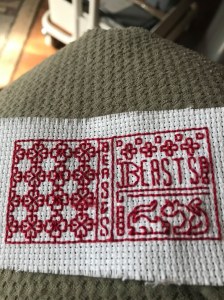 Arlys says, “To borrow Ellen’s phrase–a loverly box of Yum! (referring to the largesse pic that was used for the event copy) I’ll try to catch up later. Finished the IB book cover embroidery–now we’re at page folding, which is really boring! Here’s the finished embroidery. Cuz kitties!!” 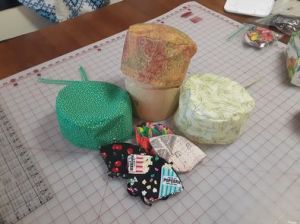 Amy DeWilde – Still working on pot holders. Bright orange is on the needles now. Have purple and tangerine scans to work on. One scan makes 3 pot holders with some peaches and cream left over.

Today is the anniversary of the death of Katherine Parr. In 1548, at the age of 36, Katherine died at Sudeley Castle Having been delivered of a girl, who the couple named, Mary, on 31 August the dowager queen soon showed the deadly signs of the dreaded puerperal fever.

Katherine’s body was wrapped in cere and waxed cloth, and put into a lead envelope for burial. The only English queen to be buried on private land, she lies at peace within the heart of the chapel at Sudeley Castle, in Gloucestershire. Sadly, her repose has not always been so peaceful. After a lifetime of drama and the desecration of her body after death, Katherine now rests ‘neath starry skies’.

Her presence, however, is still felt at Sudeley. Along with the hauntingly beautiful remains of Richard III’s original state apartments, the chapel, which was rebuilt during the nineteenth century, contains a beautiful tomb that commemorates Katherine’s burial at Sudeley. What is left of her remains (which is not much by all accounts!) are interred in the family vault beneath the floor of the chapel.

To find out more about the life and death of this remarkable woman, head over to a blog I wrote a few years ago. It is one of my most popular blogs, probably on account of the gruesome story of Katherine’s afterlife! 😱 – https://thetudortravelguide.com/2018/11/24/sudeley-castle-and-the-remarkable-life-and-death-of-katherine-parr/

This album was recorded in 1956 and it’s probably one of the earliest audio recordings of medieval music material.
It is part of the vast discography of Thomas Binkley (1932-1995): musician, musicologist and professor of the Schola Cantorum Basilensis, playing the lute in this record. The songs of this old recording are extremely fascinating probably thanks to the style of the singers and the good taste in production, really far from the modern, pompous and glossy “plastic” productions.
The songs are all by Guillaume de Machaut, who wrote a lot of music of all genres. We have: Rondeau, a vocal musical form that developed originally as monophonic music (in the 13th century) and then as polyphonic music (in the 14th century); the Motet, a vocal musical composition of highly diverse form and style. The late 13th century theorist Johannes de Grocheo believed that the motet was “not to be celebrated in the presence of common people, because they do not notice its subtlety, nor are they delighted in hearing it, but in the presence of the educated and of those who are seeking out subtleties in the arts”; the Ballade, “dancing songs” widely used in popular poetry and song; Lai, a narrative lyric poem written in octosyllabic couplets that often deals with tales of adventure and romance and Virelai, a form of song, usually with three stanzas and a refrain that is stated before of the first verse and again after each.
I advise anyone wishing to deepen the fixed forms of medieval music, only sketched out above, to do a little research on the internet.