So disappointing to have to skip Crown and Shrewbury and (this coming week) Coronet. ….but we have a potluck this week and at least some of Coronet will end up online on the Summits Facebook page. …as much as they can get to go out, at least.

Project Day is now open for in-person meet-ups as well as in the Virtual Realm! Potluck this month will be Virtual and Real-World! Herbs Workshop and Sewing Workshop are real world. All other meetings are on hold for the moment.

When will the rest of these open up in person? We’ll probably keep right on with the virtual ones side-by-side with the actual unless this stupid virus gets worse again…. which it might, ghastly thought…. 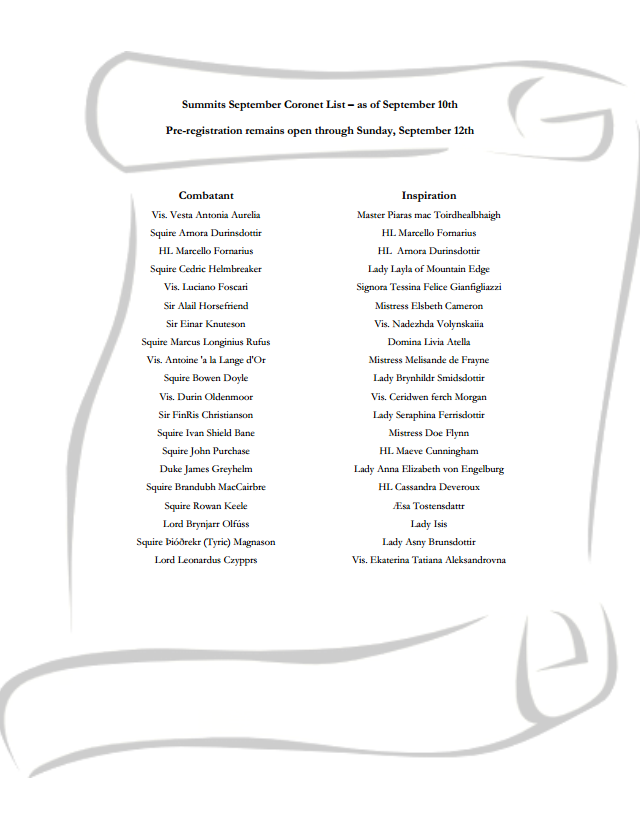 Dance footwork fundamentals: Piva! – The Creative Contessa – Learn how to do the piva, a primary step unit in fifteenth century Italian dance. Instruction includes primary source evidence for the step, exercises on doing the piva in different styles and mesure, and historical tidbits about quattrocento Italy.

Medieval(ish) on the Cheap Episode 2 // Dining with the Contessa – The Creative Contessa – Creating a medieval(ish)/Renaissance-(esque) tableware kit on a shoestring budget, including cheaposimilars and cheaporeplicas! Shopping tips and information on authentic medieval dining/production practices! A shopping guide for medieval recreationists who want to have the right look, but cannot invest in expensive historic replicas, with a focus on drinking, serving and eating vessels. We discuss extant archeological pieces and provide suggestions for alternatives that fit every budget. Flatwear (spoons/knives), tablecloths, and trenchers – all discussed! The perfect guide for thrifting for medieval items.

Making a net bag for a Roman Legionary – Sally Pointer – Step by step construction of a spiral net bag. This one is going to a Roman display but the same method makes excellent shopping and storage bags in any cordage.

priorattire – Another in the Dressing up series – this time an earlier medieval set, 12th century! enjoy!
please note, that as always, all comments that are rude, or simply do not add to the discussion and education, will be deleted. genuine remarks and questions etc are welcome and will be answered as far as I can catch up with them! 🙂
clothing etc by us – http://www.priorattire.co.uk

Cookery – I took a class this afternoon (9/11) on potatoes…. something that made me grin and shake my head was the response in Europe to them… feed ’em to pigs… they’re poisonous… only fit for barbarians… it’s all a conspiracy to kill us off…. Hmm….. sound familiar? …and muhgawd, there are potatoes that are poisonous (wild), but if you eat certain kinds of clay, you don’t get sick. <gleep> Them’s famine foods for fair! –

Eat like an ancient Roman by recreating bread from Pompeii – https://www.popsci.com/diy/how-to-make-pompeii-bread/

Cleaning funky medieval glass flasks // The Contessa’s Quickies! – The Creative Contessa – How to clean gutterals/kuttrolfs/kutterolfs, etc. – glass flasks in use from Ancient Rome to the 17th century!

Sewing – On Tuesday (her weekend) Anja did a bit of embroidery, working on both the sampler and some scissor bob designs. There were lots of ends to trim, yet, and that happened Wednesday evening, with more sewing and photos on Saturday for Sewing workshop. The two students were mundanes, who wandered in a found the embroidery fascinating

Herb Bunch – We spent time during the workshop looking at plants around the shop and the attendee went home with a couple of succulent starts. We also (finally) got some candles dipped.

Window plants (mostly new starts and most of the photos through glass….)

Helen Louise posted before the meetup started. She did some beautiful outfits for Shrewsbury… and then we didn’t do Shrewsbury.

Anja spent part of the afternoon on photos, but got together with Claire for about a hour of online chat, mostly about camping. 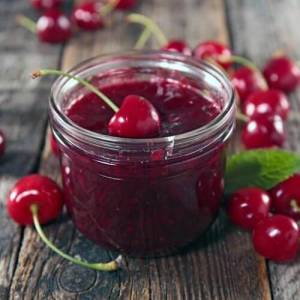 Yesterday I made a post about Nostradamus’s recipe book and magic potions (if you missed it, see via the link https://m.facebook.com/story.php?story_fbid=259111906215202&id=100063491832953). In it I quoted as an example the famous cherry jelly that the prophet of predictions recommended, and some people sent a message asking for more details …. So today the post is all about this.

Before he became famous for the prophecies, Nostradamus had already written the Traité des fardemens et confitures, which can be translated as a manual of cosmetics and canning. In this work he details the preparation of magic potions (many creams and fruit preserves that he ensures to satisfy the taste and have therapeutic properties.

One of them in particular receives a lot of praise from many experts, who treat it like the ′′ perfect ′′ jelly, which in this case is made with cherries.

The sweet is described in Nostradamus’s reception as ′′ excellent flavor, clear transparency and red glitter, like that of a thin ruby, with cherries kept preserved for a long time “. He adds that the jelly,” of excellence supreme can be offered to a king.”

Preparo:separe the most mature and prettiest cherries you can find and boot the stalk. Place the sugar in a metal pan and over it smash the cherries without stalk with your hands clean the pot to fire (high) and keep it in the boil until the volume is reduced by half, constantly messing with a clean spatula. stretch a clean cloth over an empty container and pour the contents of the boil. twist the cloth over the container to extract all the liquid from the mixture, make sure that only the lumps and cherries remain in the cloth. return the filtered liquid to the fire (low) and monitor the baking so that it doesn’t dry too much, mess with the spatula or with a silver spoon be careful not to boil too much so it doesn’t dry and burn better that the jelly gets a little ′′ raw ′′ ′′ than over-boiled as sugar tends to resect the mixture a bit during storage to know if the mixture reached the right point drop a shred on a cold surface like marble and observe the consistency. the drop must remain firm without moving or dripping to the sides and must show a red like that of a perfect Bordeaux red wine when you’re sure to have reached the point, pour the mixture into the compote vasilhams. When the mixture cools you’ll see that you made a perfect cherry jam, impossible to overcome in taste, excellence and beauty.

I add as a tip to Nostradamus’s comments for you to check out if it was successful: ′′ If you let the contents of the bottle be illuminated by the sun’s rays, you will see the beauty of a ruby. Jelly should be offered to a prince when he is annoyed with the heat so he can appreciate his delights and purity.”

Observation. The recipe does not indicate to include more cherries inside the jellies pot, but if you like them and have them, put some without lumps when the jelly is already in the pot, before closing.

Music – 𝔗𝔥𝔢 𝔇𝔞𝔫𝔱𝔢 𝔗𝔯𝔬𝔲𝔟𝔞𝔡𝔬𝔲𝔯𝔰 – 𝔐𝔲𝔰𝔦𝔠𝔞 𝔐𝔢𝔡𝔦𝔢𝔳𝔞𝔩𝔢 – Ensemble: Martin Best Medieval Ensemble
Album: The Dante Troubadours
Video: Ms. 8530
http://www.facebook.com/musicamedievale
•
2021 is celebrating Dante’s 700th year anniversary and many events dedicated to the poet are taking place here in Italy. Among the many audio publications dedicated to Dante, I chose this one by Martin Best, an English musician active in the field of early music since the 60s. In this work, Best and his ensemble have combined pieces of some troubadours mentioned in Dante’s works with some Italian Istampitte and Salterelli, contemporary with the poet.
For the images of the video I chose the version of the Divine Comedy of the Ms-8530 because images inside are simply beautiful, moreover the manuscript was made in the fourteenth century, the century in which Dante lived.

Sheep to Stones to Sheep – https://www.medievalists.net/2021/09/legendary-daoist-master/?fbclid=IwAR3fA4PoJ1Njt6v2hQZ7d_ZQwPRK1uhxYj6kFdncny_YCd0Cc3pPUprF4W8

1461: The Year That Shocked Medieval England | Medieval Dead | Chronicle – Chronicle – Medieval History Documentaries
On Palm Sunday 1461, the bloodiest battle in all of English history took place in a small Yorkshire town. The Battle of Towton saw over 28,000 people die during one of the largest snowstorms in British history. If these fallen soldiers could speak, what would they tell us? They would recount extraordinary tales of pagan rituals, plague, and the cruel land in which ordinary folk struggled just to stay alive. Now, centuries after they were buried, the medieval dead are about to rise from their graves. This series reveals true stories of medieval life by examining the skeletal remains that lie buried below the earth’s surface.

The EXHUMATION Of Anne Boleyn – TheUntoldPast – Anne Boleyn was Henry VIII’s ill-fated second Queen/wife who met her end inside the Tower of London on a scaffold facing a swordsman. Anne Boleyn’s execution is one of the most significant and shocking events in English History, with her downfall being expertly manipulated by Thomas Cromwell. Henry VIII had already had his eye set on Jane Seymour, and needed Anne out of the picture, so Cromwell imprisoned her and had Anne placed on trial from treason and other charges.
She was brutally executed on Tower Green in front of a small crowd, and then she was buried inside the Chapel of St Peter ad Vincula inside of the Tower’s walls. During the Victorian period, there was a significant amount of restoration carried out on the chapel, and they then exhumed the body of Anne Boleyn and doctors recorded what it was like. They noted it had a very small neck, and also she had died from the beheading during the Tudor period. Anne’s grave had also been disturbed by another burial.
She was then re-laid to rest inside of the Chapel, along with Henry VIII’s fifth wife Catherine of Aragon and a number of other Tudor nobles who were executed inside the Tower of London.
So join us today as we look at, ‘The Exhumation of Anne Boleyn.’