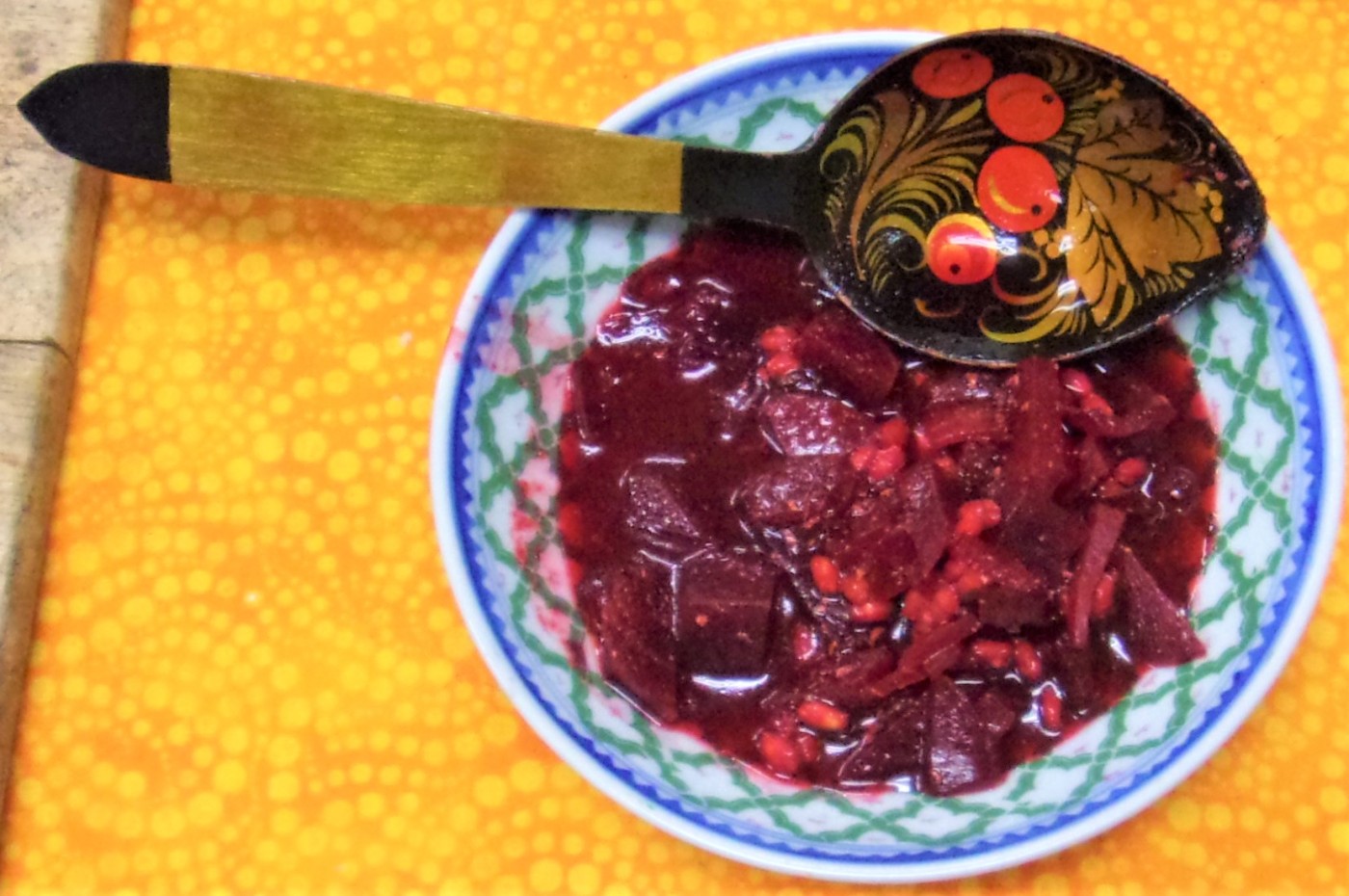 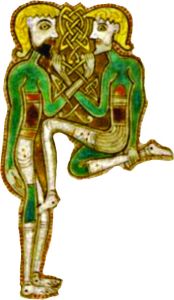 Finally tourist season is winding down. We had some rain this week and the garden is happy. Potluck took advantage of the garden produce in one of our dishes. Not a lot else was going on, although various House members talked about projects.

Project Day is now open for in-person meet-ups as well as in the Virtual Realm! Potluck this month will be Virtual and Real-World! Sewing and Herbs workshops are open for both. Masks are required. All other meetings are on hold for the moment.

When will the rest of these open up in person? We’ll probably keep right on with the virtual ones side-by-side with the actual.

Summits Coronet 9/18/21 – Only fighters and necessary officers could attend, but we were all cheering them on, anyway!

Huzzah for the new Tanist and Tanista of The Summits Viscount Luciano Foscari and Signora Tessina Felice Gianfigliazzi!! Huzzah!!

The lovely Pavane “Belle qui tiens ma vie” comes from a French dance treatise Orchésographie, published in Lengres in 1589, and written by Jehan Tabourot, a canon of the church, under the pseudonym “Thoinot Arbeau”. Arbeau provides wonderful insights into the social dances of the mid-to late 16th century, along with instructions using a unique printing system which correlates notes of the dance tunes with their steps. He is credited with the composition of this chanson in four parts, and includes the appropriate drum rhythm to be played throughout. The Pavane was danced “walking with decorum and measured gravity”. It opened grand balls at court, heralded entrances and processions, and was played “when a maiden of good family is taken to Holy Church to be married”.

This performance was part of Consort 8’s COVID-safe concert.

Wacky theories from the Middle Ages – Medievalists – Tight hose caused the Black Death, licking a bear into existence, and the Ordeal of Water. In this episode, Danièle tells us about some of the stranger ideas that came up in the Middle Ages.

Early Week – A soup/stew got made early on in the week, specifically for the potluck. More on that below. Anja was doing more embroidery, then on Wednesday got a block of time to type up some recipes…. …and on Thursday to try to track down more sources. Friday was typing more recipes and on Saturday Loren got some more ingredients.

Cookery – A bunch of recipes from “An Early Meal” have gotten posted. I don’t know why, but not all of them are making it into the menu, so look at this page for the links. https://housecapuchin.com/winter-feast/winter-feast-norse-feast-as-lvi-february-2022/foods-from-the-norse-viking-era/

The stew was a little more “scraped icebox” that usual. The pork roast from last week was the base. It had caraway, onions and mushrooms in it and then a veg mix went in that was a couple kinds of summer squash, canned mushrooms, corn, peas and green beans plus some butter. An onion and a half, a turnip and a bunch of carrots, plus varied greens including beet tops, dandelion, plantain, sorrel and lettuces, plus marjoram, garlic, and someo other things.

On Wednesday a batch of chicken got done so’s to have broth for borscht and chicken for mortar chickens.

Wednesday night, Thursday and Friday were all typing recipes and trying to work out ingredients. There are a lot of ingredients that are going to need further research for sources or substitutes.

Pie dough
Here is how I make mine https://youtu.be/9riSdHOf8hc

Sewing – Just a little embroidery with some mundane sewing.

Herb Bunch – Harvest ahead of the rain. Some of this went into the “thinnings” soup.

We have a couple of people hunting goosefoot or lamb’s quarters for one of the dishes. Apparently, it’s easily wild-crafted (if you know what you’re looking for) and called “bathua” in Indian/Pan-Asian store freezers. Yarrow leaf is also required for another dish. That one probably needs to be wild-crafted.

Project Day – Anja started with the borscht and then the vegetable thinnings stew, both in the tripot, plus the pork stew just needed warmed, ditto. Pix under the recipes, and pork stew by the description above. By 3:40 the whole tripot was going. Next on the agenda was mortar chickens again. Loren was running back and forth, washing vegetables and dishes while Anja was chopping and compounding. Took a break for nibbles and picture processing then got back to it. Finally everything was cooking or ready to cook, but the soups were taking awhile. We finally nuked each of them for 10 minutes and that got them farther down the road. We sat down to eat at 7pm.

Isabeau – I’m still at work, day 10. Co worker, opposite shift, has covid. Finally getting to work on my adapted pincushion

Ailantha – Idk. I missed the day playing leaky pipe plumber games instead. Next week, I hope! 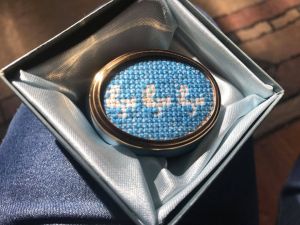 Arlys – PROJECT DAY: finished embroidering this Assisi ducky slip and put all the parts together for a holiday gift.

Helen Louise – Sounds lovely… not feeling up to doing much today.

Rosamonde Sherwood – Berry pie with berries husband picked. I put a powdered sugar/butter/rosewater & flour crust on top colored w a bit of ube. Should have thickened the berries a bit more……

Anja says – Other than I think I salted the thinnings stew twice… at least… It’s pretty tasty. We’ve been eating off the pork stew during the week, so I knew that was ok. The borscht needs sour cream, I’m afraid, and I forgot to check whether we had any. The mortar chickens worked better this way, with larger chunks, they cooked faster and were quite tender. I used quite a bit of horseradish in them and that, combined with aniseed, salt and saffron sounds like a weird combo, but it works.

…and on Monday discovered a really tasty way to do the leftovers, plain english muffin, buttered and toasted in the oven, then a cold patty set on it and closed up into a sandwich. *Yum*!

Note – This was really pretty until the pork broth was stirred into it and made it very dark.

Take a roasted chicken, dismember it small and take the sheer meat of it. And take a thin batter of eggs and of pepper, anise, pepper and saffron and pound it all together in a mortar. Fry it in a little fat, those are mortar chickens.

Reenactment of Prague’s Battle of White Mountain to Take Place on September 18-19 – https://praguemorning.cz/reenactment-of-pragues-battle-of-white-mountain-to-take-place-on-september-18-19/

Did ANNE BOLEYN have a PSEUDO PREGNANCY in 1534? Causes of pseudo pregnancies. Six wives documentary – History Calling – The second wife of Henry VIII is generally assumed to have had three pregnancies; one which resulted in the birth of Elizabeth I in 1533, one which ended in an unrecorded miscarriage or stillbirth in the summer of 1534 and one which ended in a miscarried son in January 1536. These are also the pregnancies frequently shown in films, TV shows and documentaries about Henry’s doomed Queen, such as The Tudors and Wolf Hall. There is debate however, as to whether Anne Boleyn’s second pregnancy was real, or if she mistakenly thought she was expecting again; a condition known as a pseudo pregnancy (or pseudocyesis). Indeed her step-daughter, Queen Mary I, would later experience one of the most famous cases of pseudo pregnancy in history, due to the extreme psychological stress she felt around the need to produce an heir. In Anne’s case, the Imperial Ambassador, Eustace Chapuys, reported that by September 1534, Henry was beginning ‘to entertain doubts as to his mistress’ reported pregnancy’ and this comment has fueled speculation that Mary was not the only Tudor Queen affected by pseudocyesis. In this six wives documentary from History Calling, we’ll look at the evidence for Anne’s middle pregnancy, the causes of pseudo pregnancies and how likely it is that she suffered from this phenomena. In the course of the video, I’ll also reveal how many pregnancies Anne Boleyn had and discuss the theory that she was pregnant in the summer of 1535.