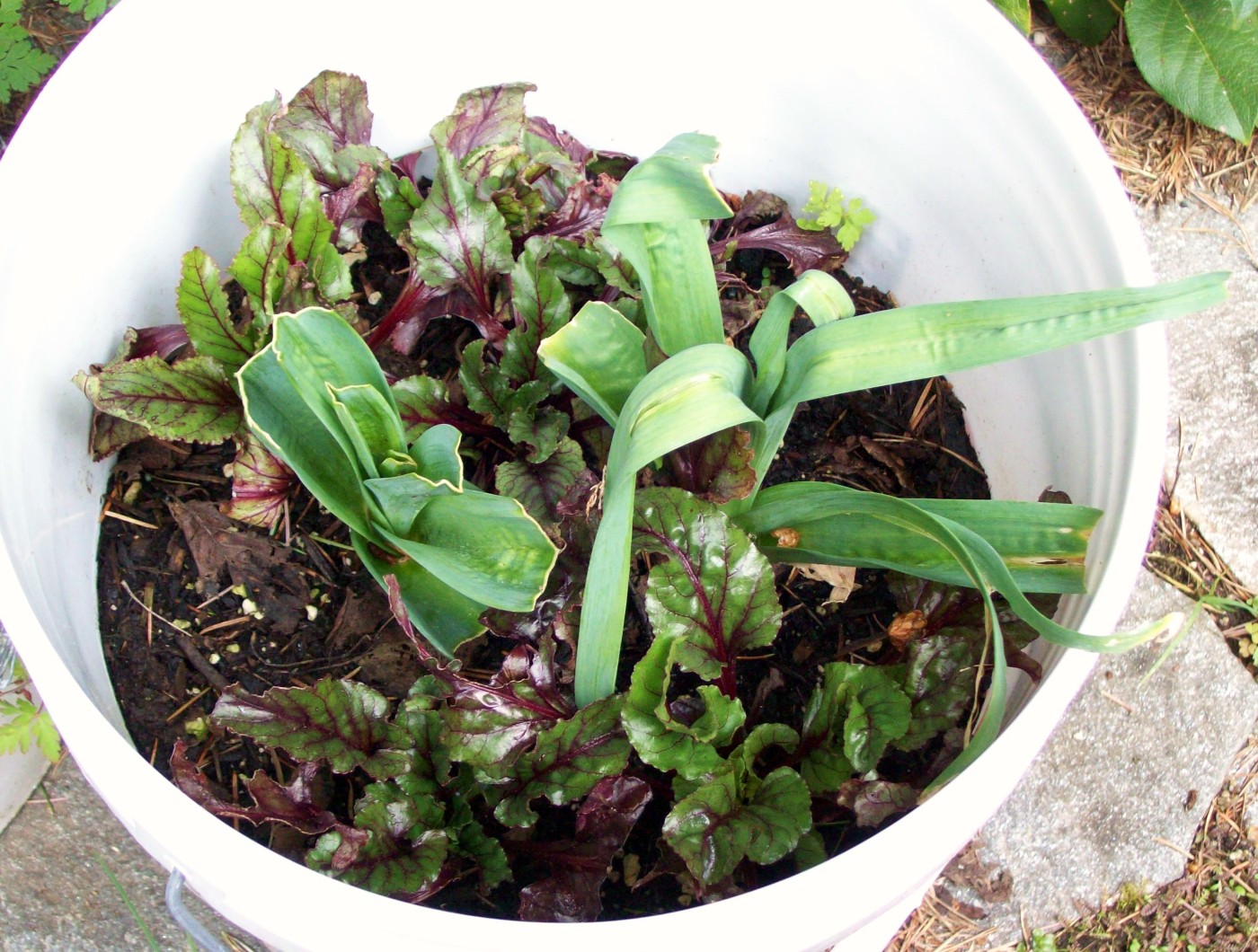 …but don’t count a week over until it’s over! It was another quiet week until the weekend. 🙂 Bits and pieces were accomplished as usual, but then we had some new people who came in both Saturday and Sunday to talk.

Vesta was given a Carp at Bar Gemels! None of us got to go, but Alan the Bowyer took some great pictures!

We may be starting the Cheese and Wine night

again, since there’s interest from the new folks, but next Sunday we’ll be doing a scalded milk cheese.

Early Week – Not much progress…. same-old, same-old…. Slow progress on the Tinkle Loom.

Cookery – This week was mostly eating stuff, the tvarog in particular. <yums, crunch, gobble, yummy-yum…..> The soup from Project Day is below.

Sewing – Nobody at workshops this week. Finished the shoes on Thursday.

Herb Bunch – Our main efforts this week went into the herbs and the garden, since we had those plants from last Sunday. The buckets needed to be prepped and get screens and to be weeded when necessary. …and then on Sunday there was some harvest for a stew.

Regrown vegetables or have been growing for awhile

Flavorings, have had for awhile.

Flavorings, new (well, the garlics have been growing for a few months….)

Others and some pretties

Project Day – …was pretty quiet, except for the small person who came along with the other two folks. Nick and Taylor are LARPers who just moved to the area. They’re not all that into the SCA, but are into that kind of re-creation/reenactment/roleplay fun.

We had a great time talking food, making ourselves hungry, talking, eating food, talking, working on projects, talking, handing baby around, and discussing getting together for cheese-making,  potlucks, brewing and such.

Harvest was in the morning. The soup got made during the day but took way long to cook. Loren made bread and we had fried rice for lunch and then baked potatoes with butter, sour cream, chives and tvarog. Nick loves the tvarog, so we’re going to make some more in the next couple of weeks.

Cutie-Pie – Did the typical baby things, but this one was a hoot. She grabbed the blanket and was chewing it (which is why her face was covered) and was making cooing and giggling noises as she flailed around!

A drinking song. In the third and fourth stanzas the Latin frequentative adverbs are translated with their classical meaning, three times (ter), four times (quater), etc. It is possible, however, that they are used as ordinal adverbs, i.e. ter means thirdly, in the third place, etc. Why a toast involving bis twice is missing is not obvious — there may be textual corruption.

When we are in the tavern, we do not care about what earth is (i.e. what we are made of), we set about gambling and over that we always sweat. We must investigate what happens in the tavern where money is the butler; pay attention to what I say.

Some gamble, some drink, some live without discretion. From those who spend their time in gambling, some are stripped bare, some win clothes, some are dressed in sacks; there no-one fears death, but for the wine they throw dice.

For pope and king alike all drink without restraint.

The poor drink, and the sick, the exile and the unknown, the boy, the greybeard, the bishop, the deacon, sister, brother, old woman, mother, that woman, this man, they drink by the hundred, by the thousand.

Large sums of money last too short a time when everybody drinks without moderation and limit, even though they drink with a happy heart; in this everyone sponges on us and it will make us poor.

Damnation to those who sponge on us! Put not their names in the book of Just.

A restoration of a period house.