Visitors and new folks made it interesting, although otherwise it was quiet this week. We’re down to 4 active members, one of whom is in school. We had a visit from one of the distant members, Anja and Loren’s son, Amor, (who is in the Air Force) and heard from a couple of others who live over in the Valley.

We’re hoping that the sewing kit will get to Egil’s. It was shipped on Friday and the right people have been notified. All the meetings are at regular times this week. Next potluck will be on June 25 because of Investiture.

One Saturday we got word that the very talented Tryggr Tyresson was put on vigil for Laurel for his marvelous stonework! The elevation will be at Egil’s. (Album below) And Viscount Sir Christian Bane and his Inspiration Viscountess Helene d’Anjou are the new Heirs. Huzzah! 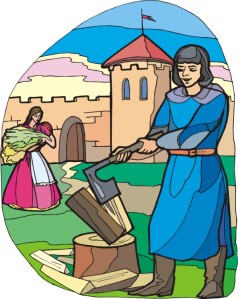 Anja worked on the embroidery for her pincushion kit (pix in Sewing) and started planning some for a pin ball and did some rolled hem research. Loren finished the varnish on the sewing box and Anja got the last trimming done and then it got mailed on Friday. No, the picture will show up *after* Egil’s, not before!

Materials got sorted and put away. Pincushions got cut. Several projects got talked out and some discarded. Materials purchases got budgeted.

Cheese and Wine Workshop – Amor was here for a quick visit. He’s Loren and Anja’s son that’s in the Air Force. He’s moving to Eskalya in Oertha. He wanted to see cheese being 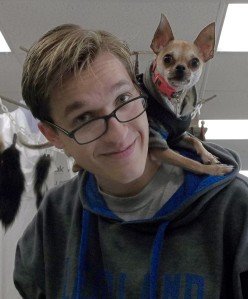 made, so that happened Wednesday night and then the cheese got fried on Thursday!

He liked it and took 1/2 with him on the next leg of his trip!

What was even funnier was that his little dog, Pooka, (having had too much cheese earlier in the day) was having all kinds of fun licking everyone’s hands and faces after we had eaten our share!

Sewing Time – Happened 3 times this week! With Amor there, Anja and Loren sat down on Wednesday and all three of them worked on projects. Loren had made a bone needle for Amor and finished up a bamboo case for it. Amor worked on a bowstring. Anja was working on pouches and pincushions and then kept on with those on Thursday during the regular sewing time. Then on Saturday we sat and talked to two new people while Anja was working on the pinball.

Amor’s bowstring – The odd part of this was that when he mis-tied the knot at the other end of the string, it twisted his bow all out of shape, but then he managed to twist it back!

A goodie for Anja, redwood!

Most of these were just one or two steps, but the tudor rose one was stitched start-to-finish and the blackworked one got the top done, pressed on Thursday and stitched on….

We also got Amor outfitted with a tunic, some sewing tools, a couple of myrtlewood pieces and some wood butter (so he can sand and finish them) for feast gear and a pouch to keep it in, then sent him and Pooka on their way Thursday evening with best wishes for fun in Oertha!

Herb Bunch – …started with sorting some of the dried herbs and labeling things. AFter that we worked on the blossoms from the sweet woodruff plant and talked about coumarin. After the workshop time, Loren got one of the bottles of white wine and we set up a May Wine.

Project Day – (Anja) The whole morning was cooking. Loren made bread. I set up a meat pie, then prepped ham including making ham broth that mostly went into a bean soup for the week and then finished up the May Wine, set up the carrots and thawed the butters.

May Wine – a “traditional” spring wine

…and then we started realizing that no one was here, so put off baking the pie until later, because the two folks who had definitely said they wanted to be here couldn’t make it until well past 5pm. So we did finally have our feast, but in the early evening.  Jeanne got her share, even though she couldn’t join us. 🙂

Anja got some licks in on her pinball, but didn’t finished. She was too busy talking to the new folks!

Another of Marya’s series on Temple Rings – https://kargashina.wordpress.com/2017/05/17/s-shaped-temple-rings/

A series by the Treasury on the Picts

Crown Pix from the An Tir Virtual Feed